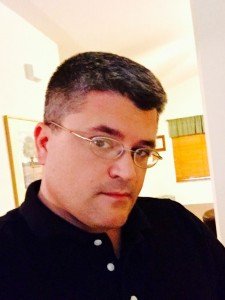 My name is Joshua C. Cook, and I’m embarking on new chapter in life. Namely, writing and self publishing sci-fi and fantasy eBooks. I’m not limiting myself to those genres, but those do seem to be my particular focus.

Back story: I’ve always been a voracious reader. At various times in my life I’ve read 6-10 books a week. There have been times over the years (I’m 47, so it’s been some years!) I’ve finished a book, and thought “Hmm.. that was.. OK. Not great, but OK.” and thought I could do better. But I never really acted on those thoughts. 5 years ago I decided to start jotting down in a notebook story ideas when I’d have them, which turned out to be semi often, and the most random times. But I still never actually acted on them, it was always a “sometime, someday” sort of project.

For a large portion of my life I’ve always had some sort of creative outlet. Cooking, art, even theater and acting. As I’ve gotten older, gotten married (to an amazing woman), had children (also equally amazing!) worked my way up the IT food chain from a lowly bench tech to starting and building an IT department from scratch, I’ve had less and less time to devote to a creative endeavor. I started thinking about a year ago, that I wanted to find something that fulfilled that part of me. But I needed something cheap, that I could do  at night, and wouldn’t disturb anyone else in the house while they were asleep.

So, I decided to start writing. In my innocence, I believed writing would be “easy” to do. I’ve since realized that I was having some sort of hallucination when I thought that. Lots of stops and starts, lots of times when I didn’t want to write, lots of times when I would write, then read it and think “Wow, this is junk!”

Oh if you search for my books on Amazon, make sure you either use the Amazon link below or search for Joshua C. Cook. There is another Josh Cook who writes and publishes Zombie fiction, and that’s not me.

But I stuck with it, and have now started “publishing” eBooks on Amazon to start.. Who knows it anyone will even like them.. but hey, there’s still a sense of accomplishment. “I made that”

And to me, that’s pretty damn important.